Switzerland’s close ties with the EU – an economic success story in jeopardy? 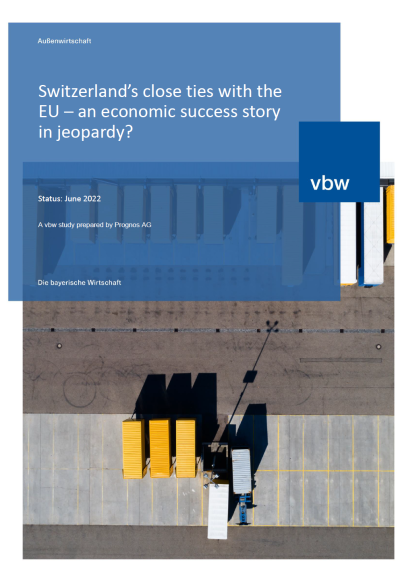 The bilateral agreements concluded by Switzerland and the EU around the turn of the millennium led to close economic cooperation between Switzerland and Germany, and Bavaria in particular. After the Swiss Federal Council had decided in May 2021 not to sign the Institutional Framework Agreement negotiated with the EU, the EU announced that it would allow the existing bilateral agreements to expire. This study sheds light on the close bilateral economic ties as well as the possible foreign trade consequences if no agreement is reached between Switzerland and the EU.

Bavaria accounts for a large part of the Swiss-German trade volume. Compared to Germany as a whole, Bavaria invests an above-average amount in Switzerland: around a quarter of Germany's total investment in Switzerland comes from Bavaria. Conversely, Swiss direct investments are an equally important source of capital for the Bavarian economy, with close to 9 billion euros in 2019. A special feature of Bavarian-Swiss exchange is the large number of cross-border research collaborations. The Horizon 2020 and EUREKA research framework programs are examples of these links. From a Bavarian perspective, around 5 billion euros in gross value added and the employment of 68,000 people depend on trade with Switzerland.

Stalemate costs prosperity and growth in the long term

Switzerland's departure from the EU would put a considerable strain on trade between the partners. Unless an agreement is reached on the institutional agreement or a continuation of the bilateral agreements, trade between the EU and Switzerland will in future be based on WTO rules and the 1972 free trade agreement between the EU and Switzerland. This is associated with considerable restrictions and trade barriers that are not advantageous for either side. Even an agreement modeled on the EU-UK Trade and Cooperation Agreement would be a significant step backward for trade relations.

If no solution is found, it will cost prosperity and growth in the long term – both in Switzerland and in Bavaria, Germany and the European Union. Especially in times of protectionism and disrupted supply chains Switzerland and the EU must send a signal of a strong political and economic partnership based on shared values and open markets.